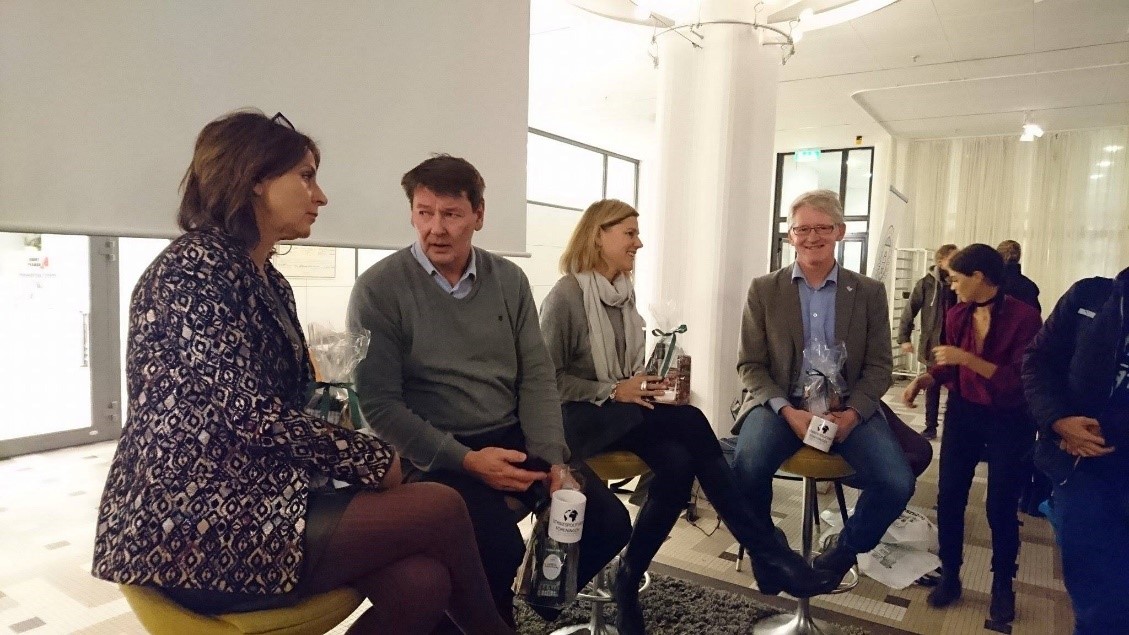 In a packed Café Athen on a Wednesday evening, four panellists gathered to discuss an inherently complex question; namely how best to implement sustainability goals in the business sector. Of course, providing an answer to this question requires us to first understand the nature of the goals at hand. The Sustainable Development Goals (SDGs), also known as the 2030 Agenda, is a set of 17 ‘Global Goals’ and 169 targets that have been set to be achieved universally by 2030. While these goals span a myriad of global issues the panel discussion focused on two of the 17 goals and how they can be implemented to foster sustainability in the business sector. The chosen goals where SDG 5, which concerns gender equality and the economic empowerment of women and SDG 8, which focuses on promoting decent work and economic growth.

With the stage set, the panellists were given a quick introduction, which set the mood for a unique evening; unique in that all four panellists had different backgrounds, and experiences which promised for a varied, multidisciplinary discussion of the issue at hand. The four guests included;

Mats Svensson; International Secretary at IF Metall, with focus on internationl labour markets.

The responsibility for presiding over the discussion was left in the capable hands of Thomas Frostberg, editor for Dagens Nyheter’s Global Development Initiative and Lund University alum. Frostberg was quick to zero in on the two SDGs that were to lie at the centre of the evening’s discussion, highlighting that while these goals are singular in their formation they do overlap in many ways and as such a discussion on one of them would inevitably spill over into the other. Moreover, Frostberg brought up an important point which provided a neat segue for the evenings fist speaker; namely that the formation of these new goals has widened the focus of responsibility, moving beyond the state level to an increased role of global civil society, NGOs and the private sector.

The first panellist on stage was Maria Borelius and Frostberg was quick to get the discussion flowing, posing a question that seemed almost impossible to answer, namely will the 17 global goals work? Borelius, undeterred by the question, began by stating that the goals represented everything good with humanity and that opposing them, she quipped, would be akin to hating warm cinnamon buns and a cup of tea. However, she was aware that this was not enough and the greatest challenge would lie in implementing the goals in the most effective way. The United Nations, Borelius argued, must play a central role in ensuring this, but she was sceptical in this happening for one main reason. She argued that the organisation is not greater than the sum of its parts and as such the personal interests of certain member states will continue to hinder the implementation of the goals. The role of the private sector and civil society is therefore pivotal, according to Borelius, but once again she was critical of a ‘narcissistic’ trend that has been growing in these sectors, where approaches to promote corporate social responsibility (CSR) are often ineffective and meaningless. As such, Borelius argues that a more strategic approach must be adopted that moves beyond a top down perspective and instead focusses on fostering the capabilities of local actors. Why the private sector is better equipped for the task than national governments was not subject to any deeper discussion, although it was remarked several times during that businesses exist primarily to create value for their shareholders, which could pose problems for the implementation of the SDGs. Borelius borrows from her own experiences to provide a solution to the stated problem, namely by providing micro-loans that aim at promoting entrepreneurial thinking and innovation.

This provided a good jump off point for the evening’s next panellist, Ann-Sofie Gunnarsson, who followed on this line of thought by highlighting the importance of facilitating social entrepreneurship as a way to meet the SDGs. However, she moved beyond purely economic support and argued that training and education are also central to promoting and supporting local businesses. As a representative for IKEA, it would have been remiss if Frostberg didn’t ask the question of what IKEA, a global corporation, is doing to promote the sustainability goals. Gunnarsson clarified that the projects in place focus on building the capacity of women and minorities, groups often marginalized in society, by providing them with the necessary skills and training needed to build successful businesses. She followed by pointing out that through these projects, previously unattainable markets have been opened up for the participants with IKEA even selling their products in their stores around the world. All told, these projects help support 2200 artisans globally and Gunnarsson was adamant that the project’s success would have ripple effects that could spread to other companies who would in turn adopt similar measures. However, time will only tell if these projects can actually have lasting effects, with the guests expressing both optimism and scepticism.

While the two previous speakers focused on how to best build the capacity of local workers, Mats Svensson dedicated his time to highlight the measures taken to ensure rights of workers are promoted and protected. While IF Metall represents workers in a variety of sectors, Svensson chose to focus on one area that he claims is the most important with regard to the SDGs; namely the global textile industry. When asked about his greatest achievement, Svensson did not hesitate to broach the years spent drafting an amicable agreement which eventually led to the ratification of the Global Framework Agreement with textile giants H&M. While the agreement, Svensson argued, guaranteed the basic rights and obligations highlighted in several other international labour agreements, it was revolutionary in that it was one of the first of its kind to promote local ownership of its implementation. As such, local sectors in the countries H&M operates in are given the necessary training and education needed to allow them to develop and implement their own codes of conduct, building both their capacity and allowing them to implement mechanisms that take heed of local contexts.

Bringing up the rear of the evenings discussions was Håkan Rodhe, who once again provided insights based off his own experiences. Coming from an academic background, Rodhe placed great importance on the role of education in fostering a more sustainable mentality in the private sector. As an organizer of a training course that brings together students from all over the world, Rodhe believes that these approaches will help integrate questions of sustainability into our everyday decisions. While maybe not asked the same hard hitting questions as the former panellists, Rodhe still raised some very important points on where the responsibility for advancing the discussion and implementation of the SDGs lies. Companies today, he argues, must address questions of sustainability as ignoring them will risk delegitimizing them in the public sphere. However, this does not entail that they do more than keeping up appearances. Which follows in line with his next argument that consumers have an increasingly important role in advancing the discussion of sustainability through the choices and decision that they make. However as long as mass consumerism continues to be a norm in modern society, issues of profit and shareholder interests will hinder the implementation of the SDGs. And this is the problem with placing the main responsibility squarely on consumers rather than creating credible institutions that can demand and ensure compliance, a point touched upon by all the panellists.

After a long exposition of each speaker’s history in their respective sector and an interesting, although uneventful, discussion, a few minutes of Q & A followed. The moderator Thomas Frostberg opens up the floor for discussion. Photo by: Misha Desai

The topics that the audience brought up were diverse, firstly the concept of circular economy. A circular economy, in contrast to linear economy (which is closer to the current model in place) is an industrial economy that promotes greater resource management and aims at reducing waste while avoiding pollution. This is achieved by using materials that can reenter the biosphere safely, while circulating other high quality materials in a closed system. Gunnarson the representative from IKEA expressed a positive view with regards to this, while Rodhe was more skeptical, citing that zero waste may be a bit utopian and that a circular economy might not solve all the current problems with sustainability.

Another audience member remarked, “Discernable change is taking so long, how do we implement the goals?”

The panel agreed on that states are the primary implementers, but they lack resolve and the dialogue about how businesses could coordinate with states is in many sectors nonexistent. There is also no system for implementation or follow up for the core compact, which makes success very unlikely. Gunnarson meant that sustainable growth gives long-term growth. This may be true, but the current system does not reward slow steady growth rather requires quick turnover and fast growth. Can such growth be achieved in the current mode of production and consumption?

While the sole purpose of the panel discussion was to tackle the topic of sustainability in the business sector, a recurring theme throughout the evening was the issue of complexity. The goals themselves are complex, their implementation is a complex process and ensuring that they are followed requires a complex network of actors at different levels of society. Nevertheless, the four panellists guided by Frostberg, did an admirable job of simplifying the issue and making it accessible for the layman. A central takeaway from the evening was that subscribing to the myopic approach that the virtues of the SDGs will be enough to ensure their full implementation is not exactly realistic. However, this does not mean their implementation is impossible. What the panellists so skilfully highlighted was how change can be fostered at several different levels; be it through an NGO such as Hand-in-Hand, a global corporation like IKEA, through partnership and cooperation like IF Metall or by training and educating the future generations, all of which have created lasting and meaningful change. As such meeting the goals by 2030 does not seem like an impossible task, which to us at least, keeps us optimistic that the necessary change can take place.