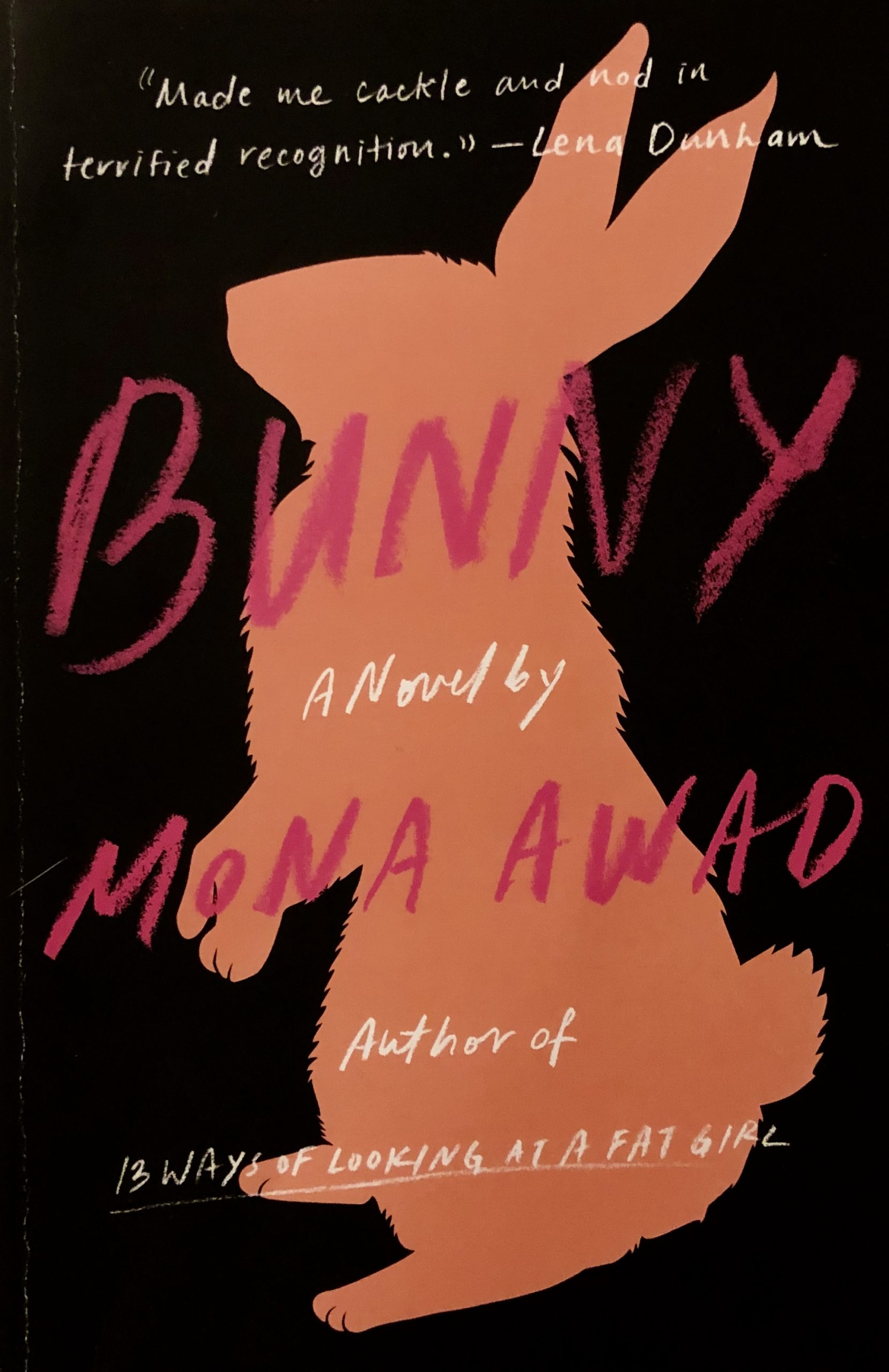 A few months ago a friend of mine lent me the book ​The Secret History​ by Donna Tartt. I was sceptical at first, because it seemed a far cry from what I usually find myself drawn to, but I vowed to give it a shot, for the sake of friendship. I did not expect it to have the effect on me that it had. The story drew me in, swallowed me up and left me entirely breathless, unable to think about anything else for days after I finished it in what can only be described as a literary frenzy. I wanted more. I needed more.

A few weeks later, in the midst of procrastinating writing my essay due the next day, I stumbled upon a recommendation for a book described as ​The Secret History​ meets ​Heathers meets ​The Craft​. That book was ​Bunny​ by Mona Awad.

Set at an elite university in New England, the story follows Samantha, a Master’s student in creative writing. It is established almost instantly that she is an outsider at the university, different from her peers. One group especially, a clique referred to solely as “The Bunnies” are presented as the complete antitheses of Samantha — rich, glamorous, privileged. Beyond this, the plot is difficult to describe, mostly due to its exponentially increasing bizarreness. Starting out as a satirical portrayal of the phoniness and fetishizations of the world of higher education, it quickly spirals into what can only be described as gothic, gory horror. Samantha, whose only friend is corpse-bride parody Ava, is invited to “Smut Salon” by the Bunnies and subsequently ditches Ava to attend. Over the course of the book, Samantha slowly finds herself turning into one of the Bunnies, morphing into their blob of saccharine babydoll dresses, plaited hair and over-the-top confessions of eternal friendship and love. In the process, she ends up sacrificing a whole lot, including her only friendship, her ability to write, her own character and essentially, her ​soul.

To be clear, the book spirals pretty quickly out of control, and at times it was difficult to understand what it was trying to say. One thing that was clear however, was that it was extremely critical of the elitism and huge class differences that plague (especially, but not solely) the american system of higher education. The story relies heavily on, at times laughingly obvious, metaphors to point out the absurdity of university culture and the true cost of conforming. For instance, the creative-writing professor’s exhortation to “kill your darlings” is twisted into the ritualistic axe-murder of human-bunny golems, referred to as, you guessed it, “Darlings”.

While terrifying for obvious reasons, the book also had a chilling effect on me because it echoed sentiments I had heard before. I recall, for instance, the college admissions scandal of 2019, where it was revealed that the undergraduate admission process at several top universities in the US had been manipulated by bribery and fraud. It is also relatively well-known that the student bodies at many universities all over the world are highly homogenous, in terms of background, religious beliefs, ethnicity, sexuality and so on (see for instance the 2016 report of the Swedish Council for Higher Education on widening access to and participation in higher education). On a more general level, the book reads a lot like critique against elitist privilege and the co-option of concepts like class and diversity for political points. But more than anything, the novel is about the spiritual cost of capitulation.

As the self-centered and overly dramatic person I am, I could not help but in some ways connect aspects of the book to my own experiences of university life. The absurdity of quaint coffee-shops selling cortados with “ornate foam art” sitting right next to a street panhandler, the contemptful stares on the backs of every person with the audacity to walk through Paradiset with an LTH-bag slung over their shoulder, the sheer panic in my chest when I couldn’t find any of ​my​ people when arriving at Lux in the beginning of a new term. Perhaps on a more profound level, what the book was trying to say became increasingly clear when I connected it to my own experience because in many ways, I could not relate. Privilege is rarely obvious to the privileged.

I got into university because I applied. I got a nice apartment because I could afford to pay the rent. My grades are based on my abilities. My friends value me for who I am and not for the clothes I wear or for my access to a summer house. My background, religious beliefs and sexuality are all what would be considered “normal” and I have never had to fight to defend my right to exist. In essence, I have never been Samantha. Because of this, I have never really had to sacrifice a fundamental part of myself in order to conform, to fit in, and this renders me essentially unable to completely relate to the main character.

What the novel does beautifully (and this really is the only thing in it that can be described as beautiful) is that it uses the absurdity of the “Bunnies”- the way they dress, talk and think- as a metaphor for the unattainability, and really, the undesirability of the ideal. The more Samantha tries to become one of the Bunnies and conform to their expectations and their worldview, the more she loses herself, and the more sinister and absurd the story becomes. Homogeneity, sameness and complete harmony should not be the end goal, neither at university nor anywhere else. However, this is not always obvious from looking at how the system works in many parts of the world, this one included. Wanting to be part of a group, to belong, is a fundamental human desire. But, as the novel so sharply points out, systematizing conformity at best leads to exclusion and at worst to complete alienation.

Obviously, this is a conclusion anyone could have reached without putting themselves through the literary roller-coaster that is ​Bunny, ​but the bizarreness of the novel made it clear in a way that was impossible to ignore. Maybe this is the beauty of fiction. It allows us to point and laugh at ourselves in the mirror while at the same time forcing us to realize uncomfortable truths about ourselves and the world we live in. ​Bunny​ was not a perfect book, and in all honesty I’m not even sure it was a good one. It was, however, brash. It was funny. It was loud, strange and in-your-face. Perhaps more than anything, though, it was evidence of the poor quality of online book recommendations.